The Inside Scoop on Ranger

The Inside Scoop on Ranger

As everyone who reads our newsletter will know, we at Barpro SA have taken the decision to add Storax/Ramada’s very successful Ranger radio shuttle system to our high-density storage solutions as a fast and efficient alternative to more traditional systems such as drive-in, gravity, push-back, and even, in some cases, mobiles.

Because of our relative inexperience with this technologically sophisticated system, I, as Barpro’s resident ‘racking expert’, was despatched on a week-long fact-finding/information- gathering/training mission to Europe towards the end of June this year. 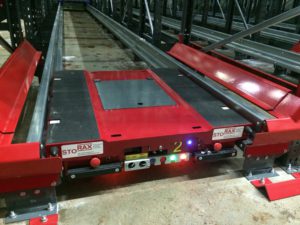 Storax’s main production facility of this equipment for the whole European market is situated a few miles outside Liege, on the eastern, French speaking, side of Belgium; but while my limited French was of some occasional value, it was mostly just a cause for amusement amongst the locals – nearly all of whom speak pretty good English. I was graciously hosted, along with other delegates from UK, France, and Portugal, by Storax management and team, all of whom take great pride in their product, and its success.

At the factory I was able to observe the Ranger being manufactured, assembled, and tested; and received valuable insight regarding the technological advances Storax have made that put this machine ahead most others previously available on the market. I also received intensive training in the context of the hardware, software, controls, etc. that make this such a potentially versatile and effective solution.

An important part of the induction program was the visiting of customer sites where the Ranger has been successfully installed and is fully operational, and these visits were real eye-openers – from huge frozen vegetable stores (25,000+ pallets, largely chips, which the Belgians call ‘frites’ and serve traditionally with mussels) to agricultural chemicals, to mechanical and electronic components and finished goods. I was greatly impressed by seeing the system actually in operation by highly-satisfied customers who often seem to wonder how they managed before.

One site I visited, across the border in the Netherlands (where the language Is uncannily similar to Afrikaans), I spent some hours in a huge freezer, still under construction, where a new Ranger system was in the process of installation. I was able to observe the construction techniques of the specialised racking required to accommodate the Ranger, work with the highly-skilled installation teams, and even observe the commissioning of a Ranger through to its testing and ‘initialisation’ – a process whereby the machine ‘learns’ the parameters of the system into which it has been placed.

As a measure of Ranger’s success, there are already several hundred units in use across Europe, and Storax employ no fewer than 14 full-time skilled and experienced installation teams to keep pace with the demand.

At the end of the visit I came away thoroughly impressed, and equipped with the greater knowledge needed to offer our customers an even more comprehensive level of advice on their various storage requirements.