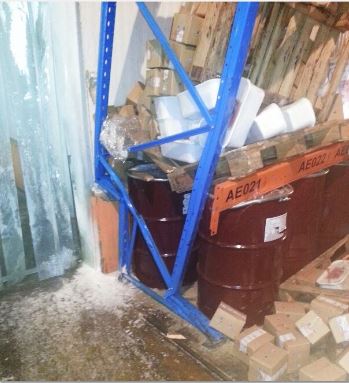 Fortunately the collapse of pallet racking, whether in cold or ambient situations, is very uncommon. However recent experience shows that it can happen, and when it does the results are usually disastrous. At the very least major disruption of operations and serious financial loss from damage to product and equipment; at the worst, injury or even loss of life for personnel.

It is not always easy to explain such disasters, but one thing must be clearly understood. Racks do not collapse on their own.

Modern racking from reputable suppliers is carefully engineered to perform the task it is specified for. Racks collapse only when compromised by serious overloading beyond its planned function, or from damage caused by carelessness, or misuse. The latter is generally the result of being impacted by handling equipment.

Such damage weakens the structure, and although a major impact can sometimes cause immediate collapse, often it is accumulated small impacts that gradually build up until the rack is unable to absorb any further abuse and ‘gives up’. It is critical that drivers report any rack damage as soon as it occurs even if they were the responsible party.

There are many dangers to be aware of when operating a pallet-rack-equipped facility. Warehouses and cold-stores are being built higher for cost and operational efficiencies – the norm now being up to 12 metres – and this makes the risks greater, and also the operators’ task more demanding.

It is essential that operators are professionally trained – and this includes ongoing refresher courses – but motivated as well. Their eye sight also needs to be checked on a regular basis. They should be reminded constantly of the potential dangers of carelessness; and it is vital to ensure that the demands of the job are made as reasonable as possible. Managers and supervisors need to be aware of the pressures put upon operators by the ‘need for speed’, and also of the difficulties and discomforts of the work environment.

This is nowhere more true than in cold-stores where sub-zero temperatures can numb not only the body, but the mind as well. Concentration and reflexes can be measurably impaired in the cold, and it is vital that operators be given the best protection possible. Heated cabs, adequate freezer-wear, etc. will lead to greatly enhanced performance as well as safety.

So apart obviously from over-loading, the first vital component of avoiding the danger of racking collapse is preventing damage . . . But the second is being aware of such damage if and when it occurs.

Which brings us to rack inspection. This however is a subject all on its own, and deserves a follow-up article in the next issue.