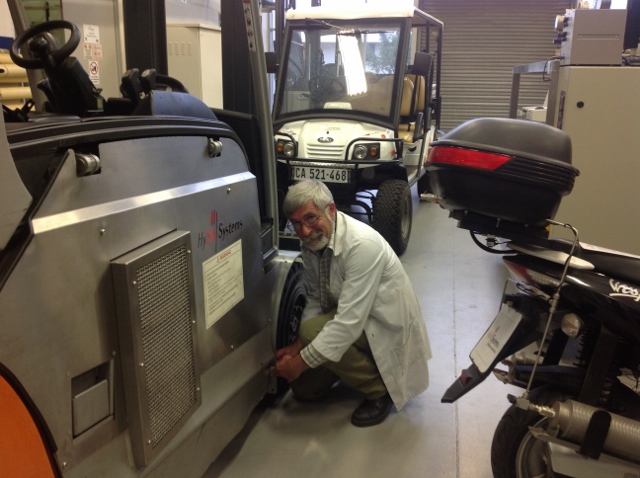 We visited Dr Mykhaylo Lototskyy at the HySA Systems Competence Centre which is part of the Department of Science and Technologies initiative to develop fuel cell technology for commercial use. The 2023 objective is to be using 25% of the world’s platinum production for fuel cell technology.

Fuel cells were first developed in 1838 with the first commercial applications in the space (sources of water and electricity) and defence industries during the 1980’s. Whereas a battery stores electrical power a fuel cell generates electricity via a chemical reaction that normally uses hydrogen as a fuel. At 50% efficiency the by-products are green friendly water and heat with little noise. Dr Lototskyy was recently featured in the media demonstrating a Shill forklift powered by a fuel cell at Impala’s platinum refinery in Gauteng.

Dr Lototskyy confirmed that while there are over 9200 fuel cell powered forklifts in use, almost all in the US. Studies have shown that the costs of ownership of fuel cell forklifts or MHE to be 10% cheaper than battery operated ones in Distribution Centres where there is 24/7 operations and in excess of 60 MHEs to reduce the unit cost of the refueling and distribution infrastructure.

Some of the obstacles to the widespread use of fuel cells include the sourcing and distribution of hydrogen. As a by-product of hydrocarbon processing it is produced by Sasol purified of CO and Co2 and piped to metal refineries such as Impala’s. Hydrogen can also be produced from water via Electrolysis (1M3 of hydrogen per 4 to 5 KWh of electricity. The Department of Science and technology together with its Japanese counterpart is currently planning a high temperature solar hydrogen plant for South Africa.

Compressing, storing and distributing Hydrogen is not simple either given its inflammatory properties, remember the Hindenburg airship disaster, 720 grams of hydrogen at 200 bar pressure in a special non leak cylinder weighs approximately 50 Kgs, so long distance transport is expensive. The efficient storage of Hydrogen in metal hydrides is Dr Lototskyy’s speciality and he showed me the on-site furnaces where the new hydrogen receptive hydrides are made.

As each fuel cell produces between 0.38 and 0.85 volts, multiple cells must be joined in series or stacks to provide sufficient power together with the correct quantity of hydrogen. It is also necessary to control supply of the oxidant (air) to maintain operating temperature as well as to provide nominal output voltage at varying load (output current).

All this support infrastructure is called, “Balance of Load.” Dr Lototskyy showed how bicycles, scooters and golf carts could be powered or have their range extended by fuel cells. Making a fuel cell plant big enough to power a 3.0 ton forklift shows how far the technology has advanced.

Although fuel cell powered forklifts can be economically justified in a large high volume US distribution centre, given the infrastructure costs involved I wouldn’t expect to see them in commercial use locally for at least the next five to ten years. However if the Government provides sufficient incentives, and localised solar production is successful, fuel cell forklifts might become a fact of life sooner than we think.