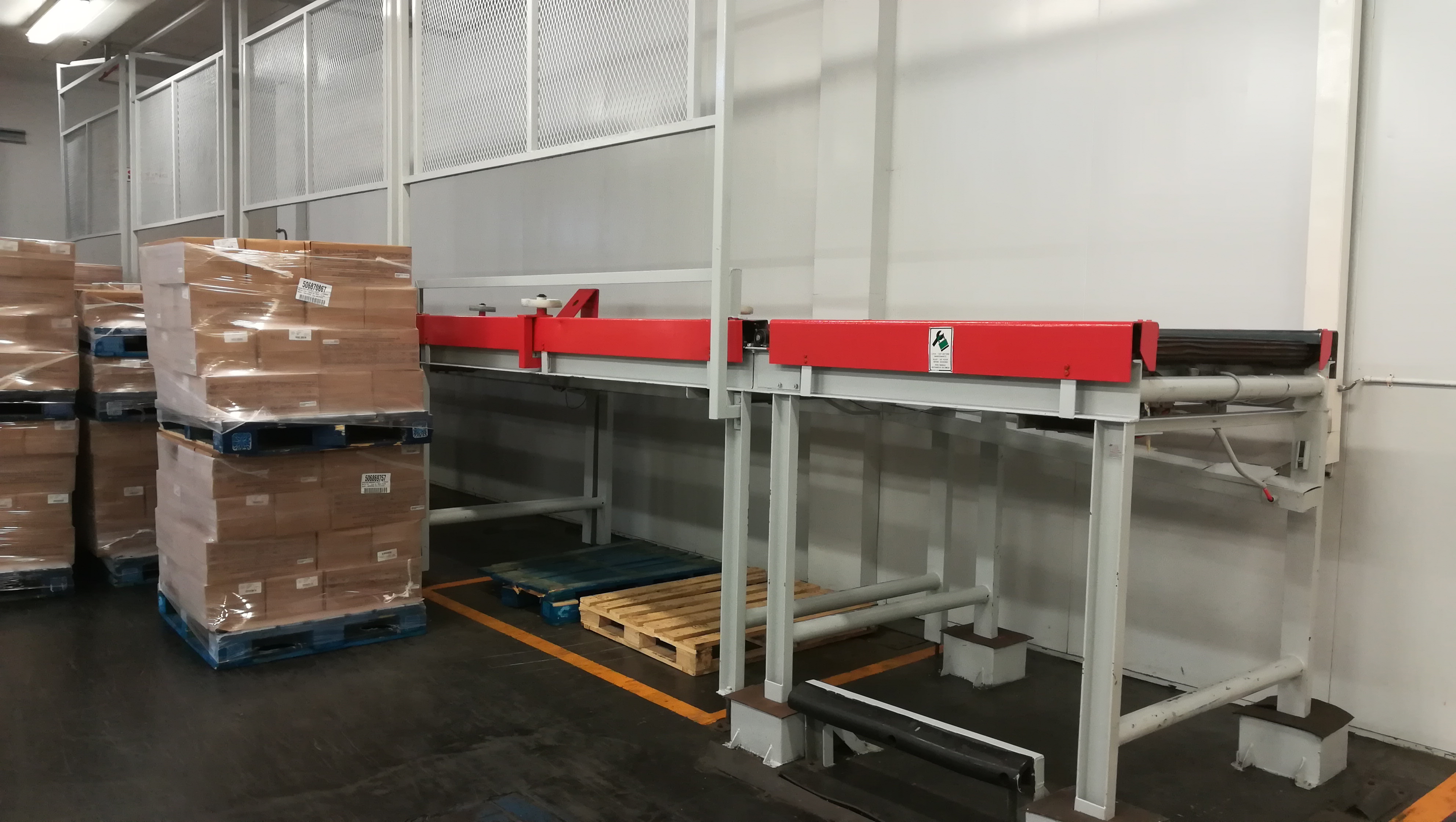 Pallet conveyors which move pallets of frozen product into and out of freezer stores have had a chequered history in South Africa. Over twenty years ago they were popular, with extensive systems being installed in several cold stores. Thereafter they became unpopular and now there is a marked resurgence of interest.

While some recent inquiries may be due to increasing energy costs, there are several other reasons why conveyors should be considered in both cold and freezer stores.

Older freezer stores were built on ground level rather than at 1.5 meters to allow for direct fork truck access. When raised loading areas were added to improve loading efficiencies conveyors working in conjunction with reach or counterbalanced trucks were and still are a useful way to bridge such height differences which can be so problematic for forklift and reach trucks.

Solid “night” doors, often 2.4 meters wide by up to 5 meters high are not a good way to conserve energy. Often left open, they allow, even with strip curtains, for large volumes of expensive cold air to escape as well as for large volumes of moist warm air to enter the freezer chamber. Doorways being the most energy expensive part of a cold room, several alternatives to night doors have been developed, most of which have received attention in previous issues of this newsletter. For energy saving, conveyors are attractive as hatches only need to be slightly bigger than the loaded pallet. However, the hatch arrangement needs to be designed so that there isn’t a snow/ice buildup around the conveyor inside the store. Reach trucks and forklifts enter the freezer via a larger door that then remains closed. Where a normal freezer store entrance can be 13m2, a conveyor hatch can be as little as 2.5m2. Even if there are 2 hatches one each for the in and out feed conveyors the combined opening area is still reduced by around 60%.

Conveyors are a great way to keep frozen product at operating temperatures before dispatch or before put away in the racking system. The pallets sit on the conveyor inside the store with only one pallet on the outside. Truckloads of pallets may be left on the “warmer” loading dock for up to an hour before they are put away in the freezer or loaded for that matter. Conveyors can be designed to operate bi-directionally to cope with large movements of product either in or out of the freezer where both conveyors are temporarily switched to run in the same direction. This feature does add to the cost however.

4. Equalizing work rates inside the freezer and on the loading dock.

As the pallet numbers moving into and out of cold stores continues increasing, counterbalances or man on movers on the loading dock will move pallets at a different rate to the reach trucks working in the freezers. At times the work rates will be similar but at others it will differ significantly resulting in either the loading dock or freezer forklifts/reach truck work rates constantly changing. Frequently one set of machines will stand idle until the other has caught up. Pallet conveyors which have a minimum capacity of around five pallets can allow the machines in both areas to maintain a more constant work rate by using the pallets on the conveyor to balance changing work rates. This magazine effect can significantly improve material handling productivity. 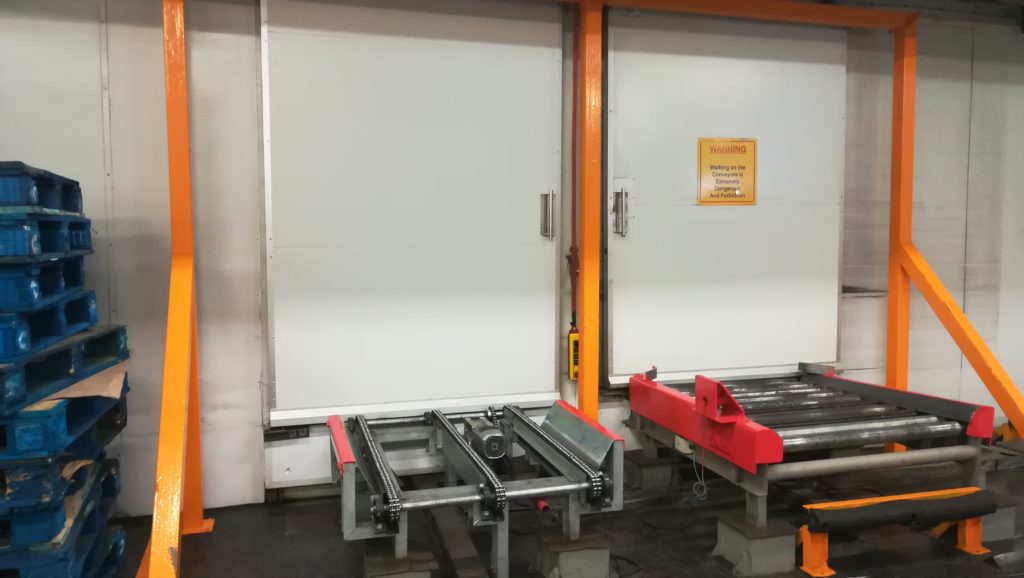 Dual cycling is where reach trucks inside the freezer and forklifts on the loading dock can place a pallet on the outfeed conveyor and then immediately pick a pallet up from the infeed conveyor or vice versa. This in theory allows machines in both directions to be productively moving a pallet on their forks at a higher rate than would be possible without conveyors. To achieve dual cycling, there must be a minimum of two conveyors and their loading / off- loading positions must be in close proximity. In practice, the ability to dual cycle can be affected by other factors including the requirements of the warehouse management system. While there are few South African stores with pallet conveyors designed for dual cycling, dual cycling can significantly increase productivity.

Some of the disadvantages of pallet conveyors in freezer stores are as follows:

1.Restricting pallet flows inside a freezer.

The positioning of conveyors inside a freezer room is important. In some instances, especially in high volume throughput situations, pallet conveyors can restrict throughput as in where they block a potential access gangway. There are however few South African stores where this sort of volume throughput is achieved and at least some of these concerns can be designed out depending on the store design. In Europe floor level slat conveyors have been developed where man on machines can drive over them which provides a solution but at a cost.

2. Pallet conveyors are not cheap and require regular maintenance.

At about R40 000.00 per running meter including tunnel steelwork, they are sometimes traded off in favor of additional forklifts which can be leased rather than purchased. Where the conveyors are relatively short and don’t require expensive 90 degree bends sometimes known as dog legs, they can be more cost effective than one or sometimes two additional machines with the added personnel and maintenance costs.

Freezer rooms should be designed to allow for a night door to be accessible when a conveyor breaks down or requires maintenance. Too often, once there is a conveyor problem, the emergency door gets used full time and the conveyor is discarded. Staff need to be trained how to use conveyors, but maintenance back up is also important.

Cold store conveyor design has also changed over the years, with driven rollers giving way to triple chain designs which are more resilient to broken pallets.

Pallet conveyors occupy more floor space than single static racks. The space above the conveyors can be lost for pallet storage. While this is true, in store conveyors can be designed with tunnel steel work which allows pallet racking above the conveyor. Normally the bottom 2 pallet levels only will be sacrificed to the pallet conveyor. The additional freezer footprint can often be resolved by making each access aisle slightly narrower.