Mobile racking can work in most storage applications and companies appreciate the fact that mobiles either save them space or double storage capacity. However, as with any other mobile equipment, mobile racking must be treated with care. Companies have realised that rack damage caused by careless forklift operators is an avoidable expense. However, there are no short cuts to correctly training forklift and reach truck drivers.

Accredited Training, a forklift and crane training company based in Somerset West, understands the need to prevent rack damage. Its instructors have noted that the following can happen in cold stores and warehouses.

These factors lead to rack and product damage, as well as the threat of serious injury in the pressurised operations of a warehouse or cold store. In some cold storage situations, supervisors do not spend sufficient time in the freezers to see what’s actually happening. Rack loading capacities can be ignored and pallets dangerously placed in the racking.

All of the above can result in expensive repairs. Accredited Training offers high quality initial and refresher forklift training and even supplementary training for operators working in mobile racking. It also offers a management seminar to enable supervisory staff to recognise bad driving practices.

Whilst recently re-reading the “storage equipment manufacturers association” (SEMA) code of practice for the use of pallet racking in warehouses, I was struck by how it isn’t followed in South Africa. While local rack manufacturers at least say that they produce their products to SEMA standards, estimates of the percentage of warehouses who even try to follow this code vary from 2% downwards. Requests to meet with a warehouse PRRS are likely to be met with a blank stare. If, and increasingly when, a rack collapse occurs, the normal reaction from warehouse management is to say that it had been under-designed.

If just the code’s system of rack inspections was implemented across the warehouse industry rack collapses could be reduced by over 80 %. Every warehouse should have a trained PRRS (person responsible for racking safety). Forklift drivers should be encouraged to report any rack impacts immediately to the PRRS for assessment and, if necessary, repair.

Competent trained persons, who may or may not be the PRRS, should inspect the racking on a weekly basis, complete the necessary paperwork for all damages noted.

Here the red, amber and green levels of damage are used.

Level of damage is twice the SEMA limits. Affected bays to be immediately cleared and demarcated with hazard tape until repaired by a trained rack repairer.

Outside SEMA limits but racks do not require immediate offloading although no new pallets should be placed in the affected area. Once the area is empty, the racks can be repaired, so long as this happens within 4 weeks.

If it doesn’t, the area is treated as Red.

Damage is within SEMA limits but is recorded and checked weekly to make sure it hasn’t got worse.

As part of the weekly inspection additional aspects including pallet quality, beam deflections, cleanliness and rack protection should be recorded and commented on. The report should then be signed off by the warehouse manager and the necessary repairs authorized. Annually or preferably bi-annually, the racking should be inspected by an external technically competent person primarily to make sure that the internal inspections are being done properly and that the internally reported damage is actually being properly repaired or replaced. 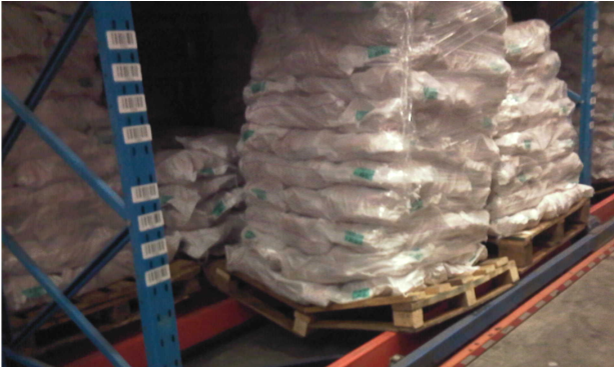 Twenty years ago one of the deciduous fruit packing giants in the Western Cape was the first in their industry to realise the advantages of mobile racking, and commissioned a Barpro Storax mobile system into their new holding store. This chill room was approx. 1360 sq. metres, and accommodated over 2500 pallet loads – nearly double what would have been achieved with conventional racking. The load specifications at that time called for 1000kg per pallet.

However, with success in the export market ever improving, the use of Hi-Cube pallets became the norm, and these now weighed 1200kg – even more for some fruits, such as pears. So as their needs expanded, some 10 years later they constructed another, adjacent, holding room, and specified mobile racking again; this time the design requirement increased to 1200kg. The system was engineered accordingly and this store was duly installed and put into full use.

Initially the new store was used for export product, while the earlier installation was dedicated mainly to local markets. However, it gradually became apparent that more and more export pallets were being placed into the ‘old’ store, and management realised with commendable diligence that the system should be checked for suitability for the increased loadings. The original rack supplier was called in, and on inspection declared, as suspected, that the rack was being dangerously overloaded by the new 1200kg loads. The entire rack system was accordingly re-configured using heavier-duty frames reinforced for the additional load.

However, continuing the justifiable concern and again exercising initiative and being admirably proactive, the customer this year approached Barpro with the information about the changes in usage, querying whether the actual mobile base units were of sufficient strength for the changed usage.

Always concerned with customer support, Barpro promptly sent Alan Moule, their in-house rack specialist, to inspect and check the system. He found that the racking was now, after re-configuration, very capable of carrying the heavier loading, but the mobile bases were perhaps a different story. When a mobile base is designed, it is purpose-engineered according to the loads – in this case 1000kg per pallet – and this is reflected in size and number of wheels, height of base, number of drive-motors, etc. Barpro had checked the original design with their engineers in Europe and confirmed that 1200kg pallets would, technically, be now over-loading the bases. However, Alan’s visual inspection revealed no noticeable signs of deflection or distortion of the structures, and the customer assured him, and demonstrated, that the bases displayed no problem in movement or operation under full load.

The customer was advised that although the system was being technically over-loaded, as long as the system continued to function adequately it should not be necessary to re-build or replace the bases (a very costly exercise) and that the system could carry on in use. It was advised however, that inspections should occur more frequently, and any sign of deterioration should be reported immediately.

Users of any racking system are always advised never to change or adjust loads, beam levels, or any other criteria without consulting the original supplier, since this can at best affect the operation of the system, and at worst can lead to catastrophic collapse.

It was gratifying to Barpro that a customer had the presence of mind to take this advice seriously.