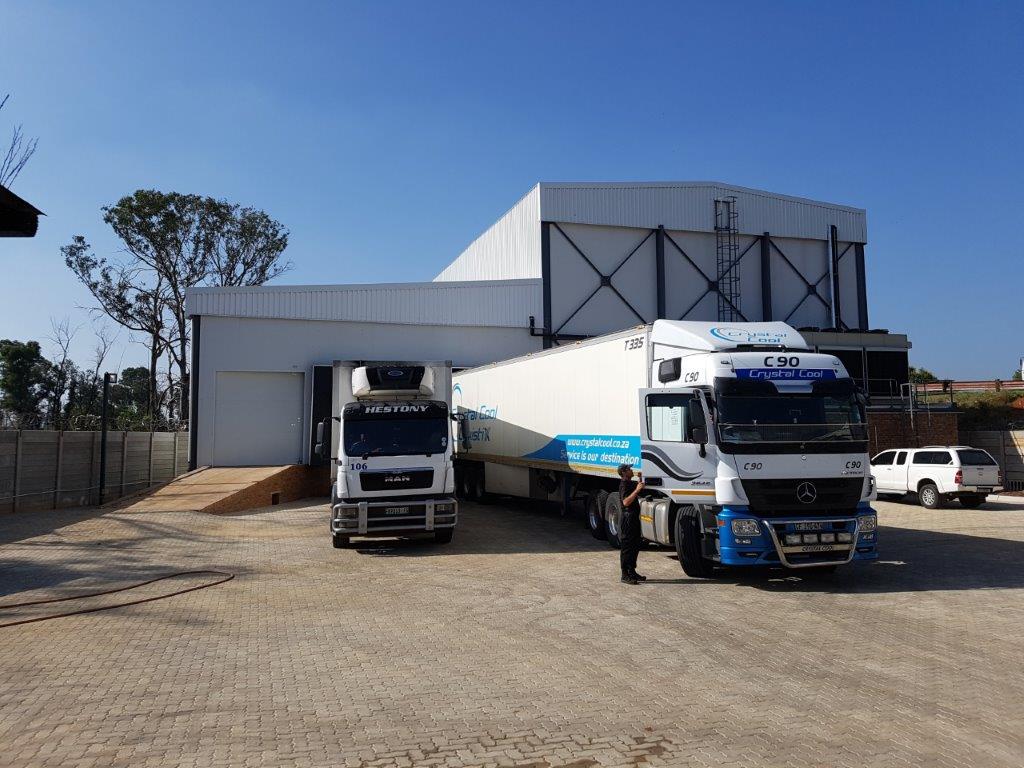 In October 2016, Rack Pro & Barpro was called to Vision Meat in Klerksdorp to build a freezer warehouse on their premises. It was discovered that a portion of their erf was not being utilized & that this space would be ideal for the required freezer space needed for storing their stock. Vaughn Jensen from Rack Pro took on the task of project managing the whole project end-to end, including aspects such as design of the building, through to the actual hand-over of the freezer.

The design of the building was quite challenging because of the shape of the erf. The space available for building was triangular and we attempted to maximise the space available to accommodate +/- 1000 pallet positions. Vaughn & the design team from Barpro, managed to get a design of building with load / off-load area & Storax mobile racking in the freezer to accommodate 1020 pallet locations. This concept was presented to client and with a few modifications the plans were submitted to council for approval.

Plans were finally approved in February 2017 & Rack Pro were given “the green light” to start building.

Tenders were then sent to contractors for each portion of the project & final approval from client to respective contractors was awarded. Once finance was in place, we managed to start “turning soil” in August 2017.

The building process came with it’s own challenges, from underground tree stumps in foundations which needed to be removed & ground re-stabilized, to abnormal rain out of their normal rainy season. This caused some delays on project, however Vaughn kept a tight schedule to ensure the catch up of lost time that occurred. Being based on site throughout duration of the project he managed to keep a ‘finger on the pulse’ & pushed contractors to complete their portion on time. This caused multiple contractors to work together on site, all slotted behind each other.

Barpro, with their busy installation schedule, managed to do their portion of this project, with their dedicated installers over 2 weekends, to catch up time on this project. Rack Pro then installed their highest quality imported racking system on Barpro’s mobile bases, to give the client a world class installation. Once again, through design teams from both Rack Pro & Barpro, their systems integrated “like a glove” ensuring that all corresponding holes & fixings between the systems fitted to the mm.

Vision Meat wanted a “green footprint” so it was decided to install CO2 refrigeration unit, which uses natural gas & lower power usage once running under optimal temperature. This high pressure system was installed by local installers within 2 weeks to get the freezer “up & running”. Further to this, LED lighting with aisle switching was installed to reduce power usage and future planning is to install solar power energy for this building.

This was a great project working in collaboration between Rack Pro, appointed contractors and Barpro to give Vision Meat a fully operational freezer in just 4 months from start of building to hand-over.

Looking forward to the next project together.

Need a storage system for your new facility?