THE DEVELOPMENT OF THE COLD STORAGE INDUSTRY 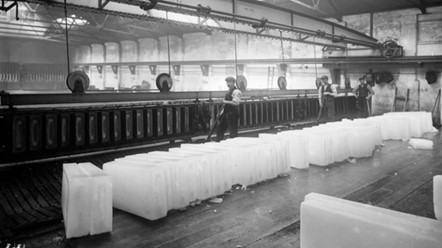 THE DEVELOPMENT OF THE COLD STORAGE INDUSTRY

Frederic Tudor’s role in the development of Cold Storage should not be underestimated. He was the 19th century Bostonian who built an international market for ice, winter harvested from the ponds of Massachusetts. With markets as far away as Calcutta and the Caribbean. Not only did he have to develop insulated panels filled with sawdust to minimize melt, but sell ice into markets that had never seen it before.

Today, fridges and freezers are just part of daily life. But keeping them full requires a sophisticated supply chain including commercial freezer stores, a concept that started with Fred Tudor’s novel business strategy. His first cold store was in Havana. Of more interest to today’s cold store managers is just how much freezer stores have changed in the past 50 years. In the late 1980’s South Africa, there were freezer stores insulated with cork. Refrigeration was provided via ammonia-filled pipes attached to freezer store walls. Pallets and pallet racking in freezer stores were still a rarity. Stocktaking in block stacked steel “convertors” was a nightmare and computerized warehouse management systems didn’t exist. But even if it wasn’t understood at the time, freezer stores were changing fast through a number of mutually reinforcing developments that occurred at much the same time.

Although counterbalanced forklifts had been around since the 1920’s it wasn’t until 1954 that British company Lancing Bagnall developed the reach truck to operate in narrower access aisles lifting palletized product to heights approaching 12 meters. This allowed freezer stores to become one high ceilinged chamber rather than several floors with lower chambers. Heated cabs arrived in the 1990’s to significantly improve driver comfort.

In Brisbane Australia, Michael Rudnev developed the insulated sandwich panel consisting of chromadek sheeting glued on either side of a polystyrene core. Not only was the insulation value of polystyrene better than cork, but Rudnev’s panels, although light, had sufficient strength to support lengths exceeding 10 meters. In Cape Town’s Paarden Eiland, one can still see this transition playing out. At Table Bay Cold Storage, although polystyrene panel was used, the main store has 2 levels with a large lift going to the top floor. On the other side of the street is I&J’s Auckland Cold Store, built slightly later, where one chamber is over 10 meters high. Both stores were built by the Michaelson’s Group in the 1970’s.

Palletization was another important development. Wooden pallets developed from wooden skids. The difference being that a skid doesn’t have bottom stringers or boards. Pallets can be placed on top of another palletized load as the bottom stringers distribute the weight more evenly. Pallets became increasingly popular in the 1930’s when used with forklifts but really took off in WW2 when the US shipped military equipment to Australia on pallets. The war end pallet surplus was inherited by CHEP or Commonwealth Handling Equipment Pool, which in turn sold it to Brambles Industries.

It was another war, this time the Vietnamese one ending in 1975, which launched shipping containers as the unit load for global supply chains.

In freezer stores cartons of frozen product change shape as their core temperature drops to minus 18 degrees C, making the stacking of palletized product unsafe.

The initial solution to this challenge was the steel convertor, a steel frame about 1650 mms high that could have a wooden pallet permanently strapped into its base. Convertors could be block stacked up to 5 in the height.

Pallet racking is the grandchild of the corrugated iron, invented by Henry Palmer in the 1830’s as, “The lightest and strongest roof for its weight since the time of Adam,” but it was only in the 1950’s that Dexion received a patent for its roll-formed pallet racking. Dexion slotted shelving, the name means “right” in Greek, was invented by Australian-born print industry supplier Demetrius Comino to solve challenges around the storage of paper on wooden shelves. It wasn’t long before Dexion racking was used for storing pallets at ever-increasing heights in freezer stores.

Another development necessary for modern freezer stores was the barcode label, which is the fail-safe way of tracking products and their position within chambers. As the other technologies already mentioned allowed freezer stores to increase in size, some now contain more than 30,000 pallets, accurate recording became crucial. This shouldn’t surprise as warehousing has always required reliable recording systems. Writing itself was developed to record who had supplied what in the warehouses of ancient Sumer.

The first barcode to be scanned commercially in a US supermarket is said to have been a packet of Wrigley ‘s Juicy Fruit chewing gum in 1974. Freezer stores experienced some teething problems with bar code scanning through the windows of heated cabs, handheld scanners that couldn’t function at minus 25˚C, and scanner beams being deflected by ice crystals on bar code labels. Once these were solved, and working in conjunction with computers, the bar code became a major driver behind warehouse management systems, without which modern cold stores simply couldn’t function.