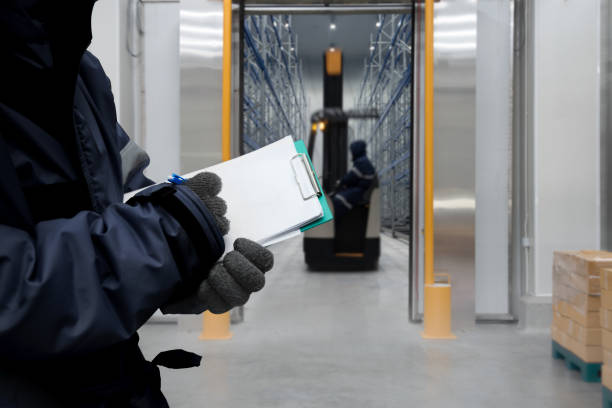 A modern cold store consists of a rigid structure that supports a refrigeration system and insulated panels. Of critical importance is the sealing of the panels to prevent ingress of airborne moisture. As cold air occupies less space than its ambient equivalent, a semi vacuum is created which will suck warm moist air in through the panel joints unless they are properly sealed. Having taken all this care to seal the insulated panels, a door opening is cut into them creating the very problem that the sealing process is attempting to prevent.

Air-borne moisture settles eventually on the evaporator cooling fins, insulating them and preventing effective cooling. Defrosts are required to melt the ice but they introduce heat into the freezer which then must be removed. Pods allow for more efficient defrosting, but it is still an expensive exercise in terms of energy used.

In 2020 Nigel Amschwand calculated that it cost R 137,500 per year to leave a cold room door open for 8 hours a day. He worked on an average size of 2.4 meters wide by 5 m high. He only took the direct costs into account. The energy cost of multiple defrosts was not included.

The first conclusion to draw from Nigel’s calculations is that no cold/freezer store should have more than one “operating” door. In practice, a freezer room with two doors will cost exponentially more than simply doubling Nigel’s calculation because drafts are encouraged. There is a freezer store in the UK with a capacity of 30,000 pallets that have only one door. The difference in energy cost between that chamber and a neighboring one with half the capacity is insignificant, illustrating the economies of scale available.

Its fallacious to argue that two smaller rooms are better than one big room in that one room can be shut down if the business is poor because there will now be two doors for the life of the store. The second door will more than cancel out any savings gained from turning a room off.

What else can be done, door-wise, to reduce energy costs?

The best way of achieving this is by using powered pallet conveyors, which must be professionally designed for cold store use. The access door is then only marginally bigger than the pallet. But two will be required, one for pallets entering and one for those leaving. Each conveyor will have an automated fast-moving solid door to reduce moisture ingress. An additional entrance normally closed can be sized for the materials handling equipment and can act in emergencies if the conveyors don’t work.

2. If the freezer store has multiple chambers, see if there can be internal openings and use only one external door. Unfortunately, if each chamber still has an external door, it will be left open.

3. In an open doorway at the very least, there should be a high-quality strip curtain to slow the movement of air in both directions. Spare strips should be kept on-site for immediate replacement. The entrance height should be about 500 mms higher than the reach truck mast. Otherwise, the mast has the same effect as a pair of scissors.

4. Given modern insulation materials, solid external or “night” doors should have suffered the same fate as dinosaurs. Heavy to move by hand they are left open. If motorised, they remain open when the drive system fails. Heater tape problems are ongoing. They don’t provide any real security and can be a death trap for someone accidentally shut inside. If hit by a forklift they can be extremely dangerous, hence the use of goalposts.

Roll-up insulated doors pioneered like most other cold store developments in Australia are a wonderful alternative for night doors and are now available locally.

5. To solve some night door problems high-speed doors can be installed inside the freezer and the night door left open, hence the name. High-speed doors work well if they are properly maintained and fixed correctly when hit by forklifts.

6. Airlocks can be created outside the entrance to which dehumidifiers can be installed which remove 99% of the moisture from the airlock air and exert a positive pressure to discourage moist warm air from entering the airlock via the loading bays. If professionally designed. the air entering the freezer is almost dry removing moisture problems.

7. Wider lower product doors can be designed with transparent saloon and/or high-speed doors and airlock dehumidifiers. Such entrances should be wide enough to allow two powered pallet jacks to pass safely and have a dividing line painted on the floor.

8. Alternatively, air curtains can be combined with dehumidifiers and high-speed doors.

9. Attention must also be given to the loading bays to prevent moist air and dust from entering the airlock. Double doors are now becoming standard even in South Africa and cushioned truck seals are greatly improved. The real test for whether a freezer store has succeeded in beating the moisture problem is when dust extractors are required in the airlock.

10. All the alternatives described above make the point of just how important it is, in these times of ever-increasing energy costs, to reduce moisture and heat entering a freezer store and expensive cold dry air from escaping. The recent introduction of reduction oxygen systems in freezer stores as an alternative to sprinklers is just another reason for adopting efficient cold store door designs. In this case, the increased nitrogen levels inside the chamber must not be allowed to escape.