A Visit to Grocontinental’s Distribution Centre 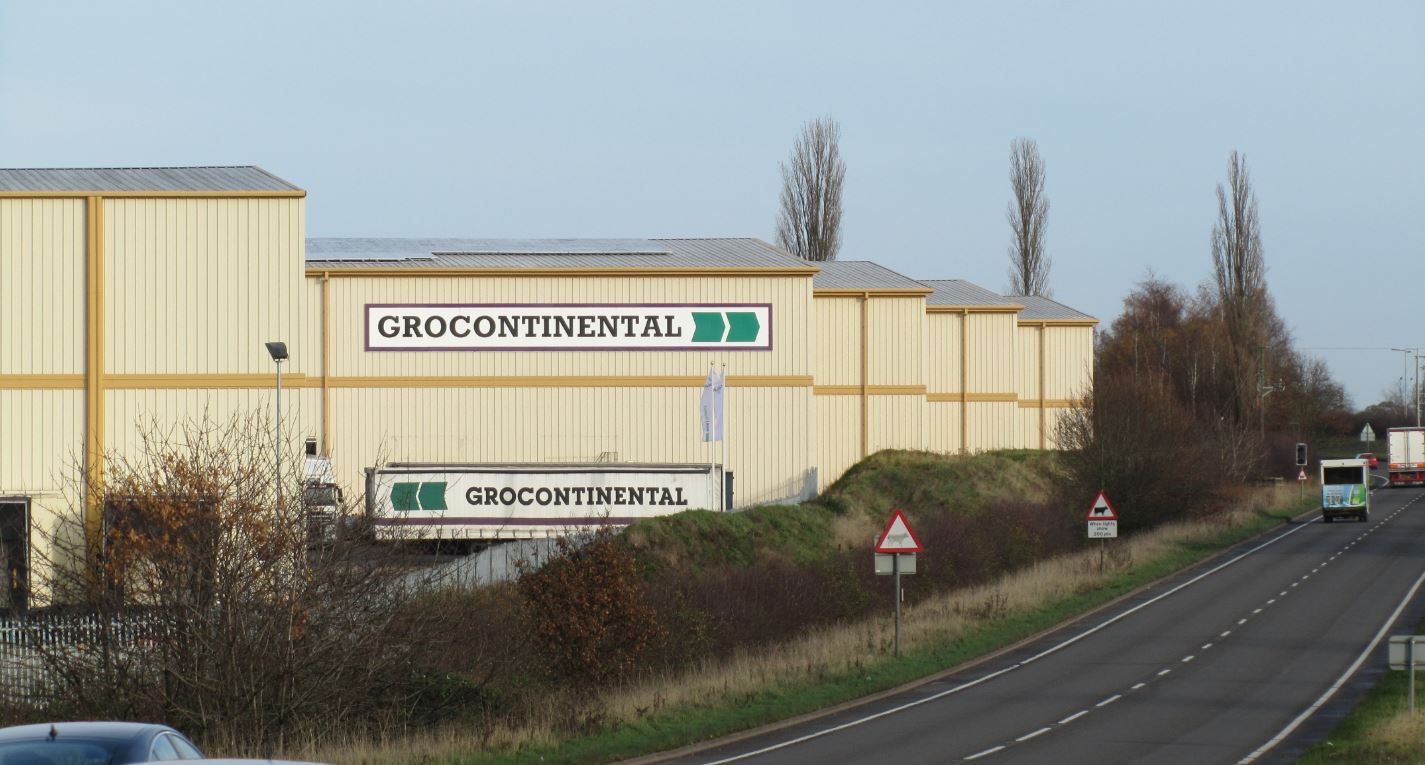 A Visit to Grocontinental’s Distribution Centre

We first printed the attached article on Grocontinental in 2012. As the news emerged in early January that Grocontinental has now become part of the Agro Merchants Group, one of the top 6 cold storage operations by size globally, we have decided to print it again especially as the points made are still very relevant to cold stores in South Africa.

Visiting this 120,000 pallet cold store in a rural setting near the Welsh border provoked some comparisons with South African cold stores.

Started originally as a transport business some 70 years ago, Grocontinental entered the cold storage business after doing a storage deal with Muller, a German yoghurt company in 1990. Frozen storage space soon followed, resulting today in what must be one of the UK’s largest multi temperature distribution companies. Grocontinental’s transport fleet has 56 tractor units and 120 refrigerated trailers which operate throughout the UK and Europe. The operation is controlled by an on-line management system which allows customers to have full visibility of where their stock is throughout the supply chain.  In line with several other large distribution companies, Grocontinental undertakes additional specialist services for its customers including blast freezing and cheese cutting. It also has a state of the art ingredient sorting, relabeling and packing operation on the same site.

When it comes to cold storage, size matters.

As another UK operator said earlier this year at the RWTA conference in Tasmania, a 15,000 pallet freezer room requires only marginally less electricity than a 30,000 pallet facility to run at temperature so long as both rooms only have one door. In South Africa, while our stores are getting bigger, the full potential of size has yet to be realised. We have been blessed, or perhaps, “cursed” with cheap electricity for so long that we tend to concentrate on capital cost rather than long term efficiency when designing our stores.

At Grocontinental I looked at a new Eiger door, manufactured in the UK by Union Industries. In South Africa, doors are still designed primarily as a security measure while in the UK the primary objective is to prevent the ingress of warm moist air. The first difference with the Eiger door is size. It has been designed for stand-on powered pallet jacks, not, as in SA, for reach trucks with 4.5 metre masts. In the UK, reach trucks have their own door which is only used to allow access to the battery bays and maintenance areas. Smaller openings for moving pallets result in less moisture getting in. But that is only the start. The Eiger door has a double skinned vertical canvas “blade”. The blade opens rapidly when the pallet jack crosses a magnetised loop in the floor and closes on a timer. In South Africa, with some notable exceptions, we still use solid night doors which are left open all day with the only barrier to incoming moisture being plastic strip curtains. In some cases even strip curtains are considered unnecessary.

The Eiger door isn’t just a high speed door, as warm dry air from a dehumidifier also circulates through the centre of the blade, side columns and top hood. This prevents ice build-up.

While air driers do consume electricity themselves, European cold stores have long understood that this energy cost is far less than frequent evaporator defrosts. Indeed, in South Africa, the development of the evaporator pod was a tacit acceptance that cold store doors were always going to be left open. In the UK far more thought has been given to solving the underlying problem-preventing moisture from getting inside a freezer room in the first place. At Reed Boardall Cold Storage in North Yorkshire, another leader in the UK industry, there are no pods and some of the evaporators are only defrosted once a month. In fact, so good is their method of removing moisture in the airlocks that dust has become a problem, necessitating the installation of extractors. The facilities manager at Grocontinental, Paul Wood, felt that the lack of ice almost justified the Eiger door on health and safety considerations alone. Being still at what I call the “paperwork stage” of health and safety in South Africa, the potential safety risks of doorway ice still are not taken seriously and it is relatively common to see large chunks being removed from doorways using crowbars. This causes small cracks in the floor which moisture penetrates and then enlarges on freezing.

From a maintenance perspective, in freezer stores with mobile racking, the mobile bases closest to an unprotected doorway will require the most attention.  Some of the moisture in the incoming air sticks to the floor as ice. The wheels on the mobile bases slip on the iced rails as the co-efficient of friction is reduced. Motors burn out, and forklifts are sometimes used to help the base along with predictable results. So the presence of mobiles is just another reason to ensure that the minimum moist air is allowed to enter a freezer room.

When I saw the extensive barrier protection around the Eiger door, my initial thought was that the drivers had to be even worse than their South African counterparts.

It was explained that in a fast moving airlock situation, errors of judgement would occasionally occur. Quite apart from spending money to protect their investment, these doors could not afford to be out of operation.

Store height in UK cold stores continues to increase in line with the increased lifting capabilities of the reach trucks. At 13.5 metres high, Grocontinental’s stores represent the current UK industry standard. The reason behind going with a higher store is to reduce the footprint, increase efficiency and get a better return on the cost of what must be one of the most expensive floors around. In South Africa, freezer stores are still being built as low as 7 metres with correspondingly large footprints in the belief that local reach truck drivers cannot be trained to put away pallets at height. The additional capacity of going 9 pallets high at Grocontinental, just shows how additional height can affect capacity.

In warehouse 17 at Grocontinental, the lights only came on as we walked down the aisle. In this chilled store they are controlled with movement sensors.

In the freezers, the lights automatically come on when a mobile aisle is opened. Automatic light switching in local freezer stores has become more common although there are still some  where the lights stay on, “twenty four seven.”  The total energy cost consists of the lights themselves and of removing the resultant heat via the refrigeration system. If a light fitting is rated at 400 watts then an additional 200watts will be required to remove the heat. One local freezer store with mobiles has 110 x 400 watt fittings burning continuously. These consume in total around 578,160 KWhrs per annum. By changing to energy efficient 250watt bulbs which only come on as required, the total energy cost can be reduced to 52,560 KWhrs, a reduction of  90%.

Freezer stores in the UK latched on to this sort of saving pretty quickly after energy prices increased by up to 300% between 2003 and 2005.

Here, we are still waking up to potential savings, although SARDA (Southern African Refrigerated Distribution Association) has established an energy bench-marking committee specifically for freezer stores. Initial comparisons have already shown that substantial savings can be made. When compared with UK stores like Reed Boardall, “efficient” South African freezers are still using almost double the KWhrs per cubic metre per year. There is also a temptation to concentrate only on technical innovations that we can personally control. To improve the situation in South Africa, we must get every employee to understand and work towards the same objectives.  I was sitting in a technical manager’s Joburg office where he explained what he was doing to save energy. On a camera monitor in his office, pallets were shown sitting in the freezer store’s ambient airlock. As they were still there at the end of our meeting I pointed this out as something that needed attention in order to save energy. “Yes, I know about that”, he said. “However I have no control over the operations staff.”

Compared with the likes of Grocontinental, South African freezer stores do not make anything like the same effort to train their staff. I suspect the reason for this lies in a belief that freezer store staff cannot be trained and they will not be in the job for long anyway. Paul told me that the productivity of each driver is monitored via the Warehouse Management System. We could do the same here but generally choose not to. Monitoring housekeeping standards inside our freezer stores does not have the same priority as at Grocontinental, although I was in a Johannesburg operation recently where one could literally “eat off the floor”. Generally we don’t encourage our supervisors to spend time inside the freezer rooms managing the drivers.

Policing is a critical part of management.

If we don’t enforce driving standards and properly investigate accidents where damage has occurred, then the drivers will do what they like inside the freezer and the results will not be pretty.  If we could only treat our freezer employees like Grocontinental treats theirs, then slowly the levels of rack and product damage would decrease and drivers would start to take pride in what they do.  In a freezer where the reach trucks do not have heated cabs, the effects of cold on the human body must be understood. I am amazed at how little interest there is in this subject in South Africa, given the research which shows African people to be particularly poor at coping with extreme cold. Good protective clothing would certainly raise productivity and reduce damage.

I watched a reach truck driver expertly placing a pallet in the mobiles at Grocontinental. He then adjusted another pallet in the same rack that for some reason was sticking out further than it should. This is exactly the sort of behavior that we should be encouraging in South African freezer stores.